For Example: Suppose, in an Elasticsearch service, the JVM Heap max size was set to 1 GB, and the catalog data size is too high, the chunk size used to fetch records from SQL database tables to insert into elastic search index (i.e PublishProductFetchChunkSize) was set to 10000.

Then there might be the case where not enough space is available in the JVM heap to hold the chunk data required for creating an index. As a result, the Elasticsearch service might throw an out-of-memory exception and the service may be stopped unexpectedly.

To overcome this issue, some configurations need to be modified mentioned below.

In the API Web.config there is a “PublishProductFetchChunkSize” key, this key is used to fetch the number of records that need to be published on Elasticsearch.

In this case, Znode recommends to reduce the “PublishProductFetchChunkSize” key value.

Suppose, the “PublishProductFetchChunkSize” key value is set to 15000, then it can be reduced to 5000. If the key value is empty or zero return the default chunk size i.e. 10000. By reducing this Key size, we can reduce the burden that is causing the JVM heap size. This Key value may vary depending on server/system configuration & space capability.

You can configure the Elasticsearch Properties by following the below steps:

It will open Elasticsearch Properties as shown below: 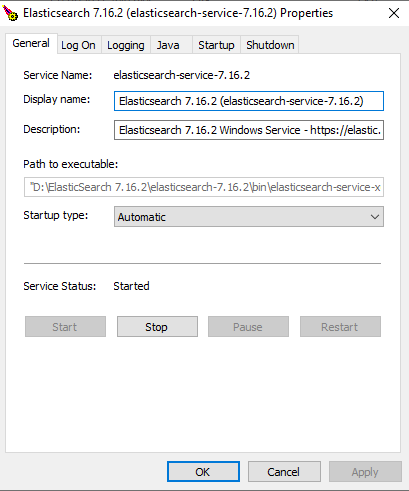 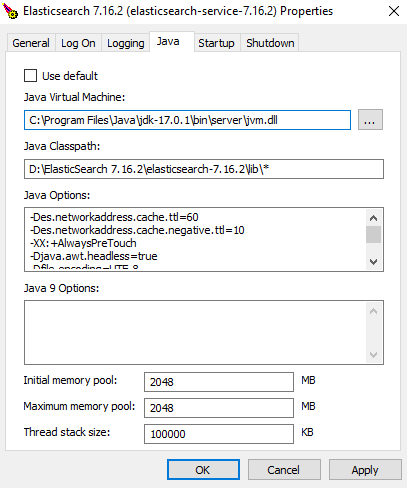 For Elasticsearch clusters, ECE gives 50% of the available memory to the JVM heap used by Elasticsearch, while leaving the other 50% for the operating system.

Thread stack size can also be tune with the Initial memory pool, and Maximum memory pool.

If the elasticsearch.bat file and elasticsearch-service-mgr.exe files are not available in the bin folder then the same setting can be configured using ES_JAVA_OPTS environment variable: